I like keyboard shortcuts. I use Vim to edit code, which is entirely keyboard based, and generally I feel better and more productive if I can use the keyboard to get things done on my computer.

But I've always found learning new keyboard shortcuts hard, particularly if I've already found another way to solve my problem already. Let's say I use an app and a core piece of my workflow involves two consecutive keyboard shortcuts. One day I learn that I can perform the same action in a single command. Great! Except I have that two-consecutive shortcut workflow committed to muscle memory and changing that is going to be really hard.

It turns out that the answer for me is Post-it notes! I've been using this technique for many years and it's worked well for me. Each week or two I'll try to find a few shortcuts that I'd like to adopt into muscle memory and learn. I'll stick them on a Post-it on my monitor as a constant reminder. I don't always remember to use them, but I remember more and more as time goes by until the Post-it becomes redundant. This is how I learned Vim; I didn't attempt to learn the myriad of commands at once, but instead picked a few each week that I wanted to get used to using.

Right now I'm trying to get better at using Amethyst. It's a tiling window manager for MacOS, and has a load of shortcuts. I've not been good at remembering the shortcuts for moving focus around windows (instead reaching for Cmd+tab or my mouse) and I don't make use of spaces as much as I'd like. So guess what I've just added to my desk? 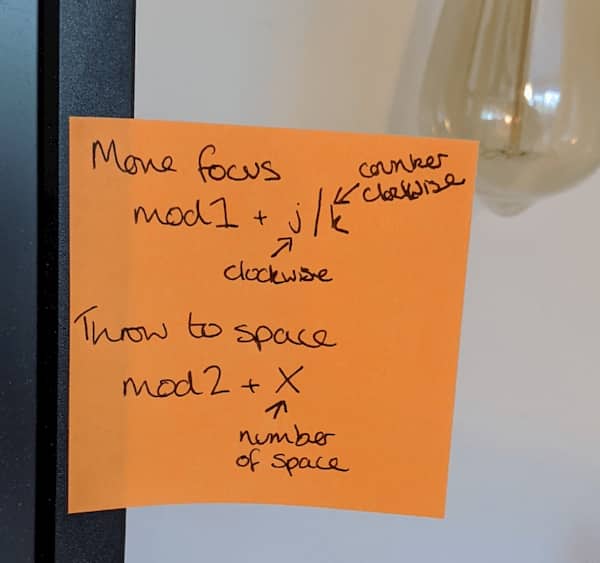 If you've ever struggled to commit things to memory, I recommend giving this a go!